Due to the current Government restrictions the museum is closed at the moment. We are hoping to re-open as soon as we can. In the meantime we will not be resting on our laurels, and will continue with our work to restore and develop our exhibits so that you can enjoy and even better experience when we re-open !

for the latest updates.

Calderdale Industrial Museum have joined the #MyLocalMuseum national campaign to help to keep museums connected with their visitors during lockdown . There will a new theme every Tuesday, with today’s theme “Travel and the Wider World.”
We have chosen to feature the Halifax machine tool company of William Asquith who expanded from humble origins in Halifax in 1865, to successfully export their products throughout the world. Their machines were used to build the railroads in the USA, and when the company had a surplus of stock after the end of the Franco-Prussian war, William chartered a boat, took his stock to Russia and sold it all ! 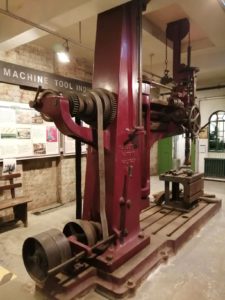 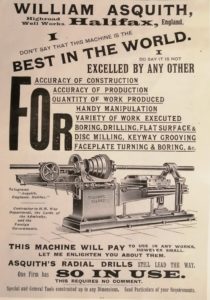 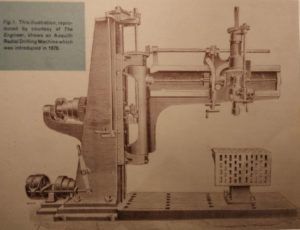 The firm specialised in manufacturing drilling and boring machines, and became famous for its radial drills. They machines were of vital use in the First World War, and in 1924 they supplied all the drilling equipment for the Sydney Harbour Bridge in Australia.
The company still exists today producing a range of computer controlled milling, drilling and boring machines in addition to radial drills.
When the museum re-opens you will be able to see an examples of their famous machines, and find out more about this fascinating and successful company. 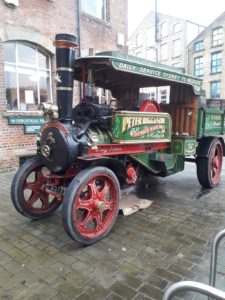 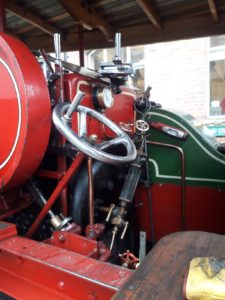 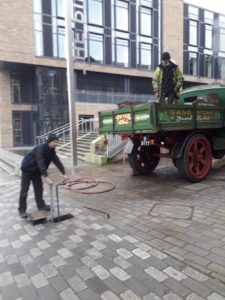 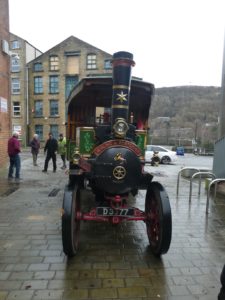 It was lovely to welcome Peter Rigg and his steam lorry to Calderdale Industrial Museum on New Years Day. Peter and his team had driven the lorry from Walsden. The lorry is powered by steam and has a maximum speed of around 19 miles per hour. It is just one of the vehicles in Peter Riggs extensive collection. The museum’s outside tap proved useful when refilling the boiler for the return journey !! We are hoping to organise a steam event at the museum sometime in the future.

Whilst the museum is closed why not tour the museum virtually by watching this informative 5 minutes film produced by the Yorkshire Post in January 2019. It features many of our working exhibits with fascinating facts about them from our volunteers.

Refurbishment of the Cork area 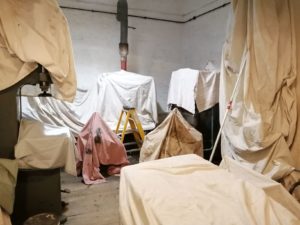 Whilst the museum is closed, the volunteer team is busy refurbishing and planning the re-interpretation of the Cork display. Cork is a fascinating substance that was used extensively in local industry in the past.
It is made from the bark of the cork oak (Quercus suber), the predominant tree species in Portugal. Portugal accounts for just over half of the world’s cork output, producing 157,000 tonnes an 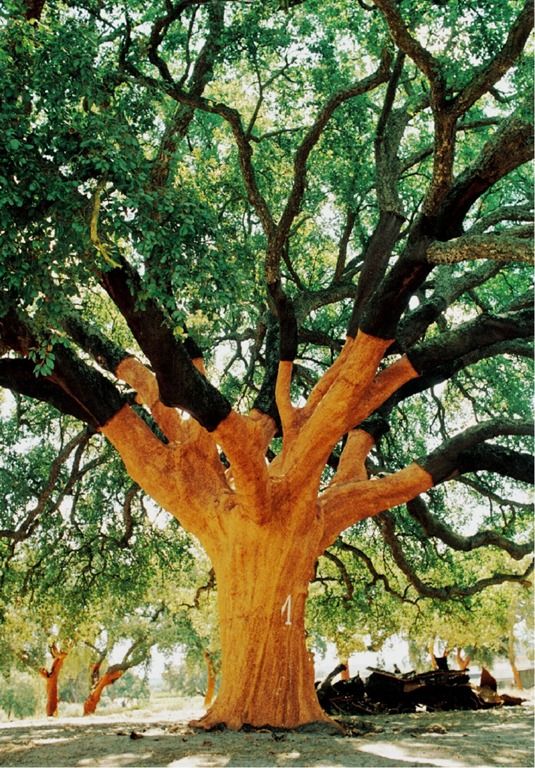 nually. There are also plantations in France, Spain, Italy, Algeria, Morocco, and Tunisia. Over 100,000 people depend on cork growing and processing in these countries.
The bark is harvested for the first time when the tree is 25 years old. Then it is removed every 9-12 years without ever damaging the tree, which lives around 200 years. Cork obtains the qualities needed for the production of wine bottle stoppers, its main application, only after the third harvesting. The tree’s acorns are used to feed pigs that make some of the best cured ham Spain and Portugal are famous for.
Thanks to the cork’s cell-like structure, the material is elastic, resilient and highly impermeable. The ancient Greeks and Romans used cork in combination with natural resins to stopper wine and oil amphorae. Now, some 70 percent of all cork produced is used to make wine bottle stoppers. Portugal alone makes 40 million stoppers per day.
Entire pieces of cork are also used in footwear, furniture, interior decoration as well as older lifebuoys. The baseball ball has a round cushioned cork centre called a “pill.” Ground-up cork is “baked” and compressed to make floor and wall tiles, good for acoustic isolation. Granulated cork is added to concrete for thermal insulation and reduced weight. Shredded cork is used in ablative thermal protection coating on booster rockets, including the Space Shuttle’s external tank, which is jettisoned as the ship leaves the Earth’s atmosphere. 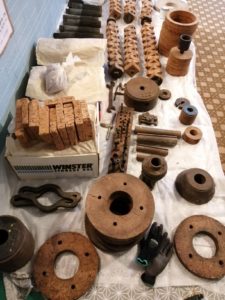 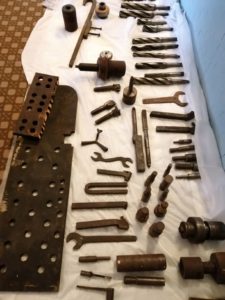 Great news, the waterwheel at the museum has been repaired and restored and is now working again, complete with it’s new special golden paddle !

Adrian Wiszniewski writes:
Work started in June 2019 to strip the old buckets away. We started with a risk assessment to put in place the necessary safety systems and procedures to work at a height some 16 feet above the base line of the tank. We began by installing temporary locking bars to prevent the wheel rotating, using chain blocks and slings as an extra layer of safety which also took any backlash out of the arrangement. Wooden removable platforms were made, to fit inside the wheel at axle level, and also to fit the gap between the periphery of the wheel and the front wall of the tank. We had to strip only a yard or so at a time and then rotate the wheel through half a turn to strip the corresponding amount off the other side. This would be repeated at 90 degrees to the first section and so on to keep the balance of the wheel to a manageable degree. The spokes were replaced, one by one, using similar procedures. The COVID 19 crisis caused a lengthy stoppage of work but we can now seethe end in sight and expect to see the wheel back in action, hopefully by early November.